Blogs and announcements to keep our team updated!

The Coalition government released its budget for 2019-20 on Tuesday (2 April) evening, which included a range of initiatives for SMEs.

The government announced a much-called for increase to the instant asset write-off additional tax relief for both small and, in a new move, for medium-sized enterprises too.

Following on from its announcement in January this year that it would increase the instant asset write-off threshold from $20,000 to $25,000 and extend it out to 30 June 2020, the Coalition government has now said it will immediately increase the instant asset write-off from $25,000 to $30,000 and expand it out until 30 June 2020.

This means that these businesses will be able to immediately deduct purchases of eligible assets costing less than $30,000 that are first used or installed ready for use.

This measure is estimated to reduce revenue by $400 million over the forward estimates period.

While the asset write-off was originally only available to small businesses, the government has said it will now extend this to medium-sized enterprises with a turnover of up to $50 million, which will reportedly cover an additional 22,000 businesses employing 1.7 million Australians.

Mr Frydenberg said that small businesses are “the engine room of our economy” and are “integral to every local community”.

“People running a small business put their livelihoods on the line,” the Treasurer said.

“They start early and finish late. They manage the front desk and the back office. They pay their workers first and take their own wages last.

“We want small businesses to prosper, and we are backing them to do so.”

Noting that the government has committed to cutting small business tax to 25 per cent by 2021-22 and introduced a $2 billion fund too, he added: “[F]rom tonight, the instant asset write-off will be increased and expanded.

“Allowing a café to get a new fridge or grill, a plumber to buy new tools or a courier a new van.”

He continued: “Already, more than 350,000 businesses have taken up the instant asset write-off. And now, even more will have the chance to do so.”

‘One of the best budgets in recent memory’

Initial reaction from the small business sector has been welcoming of the move from the Coalition government.

The CEO of SME lender Scottish Pacific, Peter Langham, noted that around a quarter of SMEs had noted that the asset write-off should be the government’s top priority.

According to Scottish Pacific’s March 2019 SME Growth Index, which surveyed 1,257 Australian SMEs, 24 per cent said continuing the asset write-off should be the top focus for SMEs.

Mr Langham said they will be delighted with the budget’s flagged increase of the instant asset write-off up to $30,000 (from $25,000) and opening this initiative up to SMEs with up to $50 million turnover (an increase from $10 million turnover).

The CEO said that company tax cuts would also be welcomed, given that 27 per cent of business owners wanted this to be a priority, while one in five SMEs wants the newly elected government to prioritise cutting red tape by reducing their administrative and regulatory burden.

“Simplifying the complex tax system and cutting red tape and, on a state basis, getting rid of payroll tax would have the biggest daily impact for Australia’s small to medium business sector.

“These are the everyday impact items that will energise SMEs, encourage business investment, and drive growth and innovation,” he said. 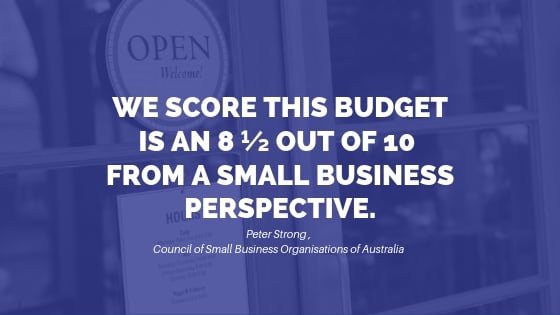 Meanwhile, the Council of Small Business Organisations of Australia (COSBOA) said that the budget was “one of the best in recent memory” in that it focuses on the four core ingredients of economic growth: increasing disposable income, improving workforce skills, improving infrastructure, and encouraging business investment.

Peter Strong, the CEO of COSBOA, said that the asset write-off, as well as the tax cuts for people earning less than $126,000, innovation funding and projections that the budget will be in surplus by $7.1 billion by the end of 2019-20 were “grounds for strong optimism about Australia’s economic future”.

Mr Strong stated, “We have collectively been labouring under an increased debt burden since the 2008 financial crisis and, like any household struggling with rising debt, this has drained positive sentiment and slowed economic growth.”

“So, the fact that the government has delivered the first national budget surplus in more than a decade – with forecast surplus into the foreseeable future – is the most pleasing outcome of this budget.

“It is our strong hope that this achievement will lift business and consumer sentiment, which, in turn, will drive increased economic and wage growth for all Australians.”

Mr Strong added: “The past few years have proven that an investment in small business is an investment in jobs and stronger communities, and that is why we are very pleased with this budget.

“We score this budget is an 8 ½ out of 10 from a small business perspective.”

Other initiatives impacting the SME space include:

Ausloans Finance prides itself as a company that provides solutions. Our team will always work towards providing a customised and tailored solution for every circumstance whether you are a client, broker or a supplier. With Australia’s largest panel of lenders and CRM to capture your sales pipeline, now is the time to see how you can leverage your earning potential for greater returns.

Ausloans Finance Group entered the market in 2009 and has grown to 3 brands within the group to offer partner brokers and dealerships a holistic approach to financing.